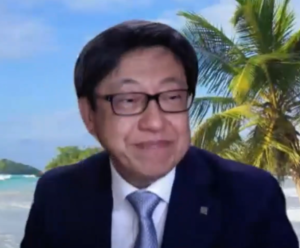 Takafumi Anegawa, the President of the Association, kicked off the meeting with his welcome speech. He emphasised the importance of collaboration between the automotive and the energy sectors, taking as an example an EV, a means of transport, also as a tool to accelerate the integration of the renewable energy sources in the grid, referring to CHAdeMO’s V2G innovation.

With nearly 300 attendees joining from various corners of the world, the assembly welcomed a greater variety of speakers as well, taking advantage of the online format. 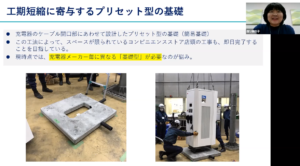 After a brief pause, Mr Makoto Dave Yoshida, Secretary-General, CHAdeMO, reported the Association’s 2020 activities as well as the 2021 strategy. Mr Axel Volkery, Deputy Head of Unit Sustainable and Intelligent Transport, DG Mobility and Transport (DG MOVE), European Commission , spoke on the European strategy towards the 2050 carbon neutrality and the policy initiatives, including the Fit-for-55 package, and expressed his gratitude for having CHAdeMO as part of the European technical discussion. Ms Lonneke Driessen-Mutters, Director Standardization, Open Charge Alliance (OCA) reported on the collaboration between the OCA and CHAdeMO to facilitate the combined implementation of the OCPP and CHAdeMO, followed by Mr Ravi Subramaniam, Director, Conformity Assessment, IEEE, joining at odd hours from the USA, who pesented the iEEE CASC’s roadmap*. 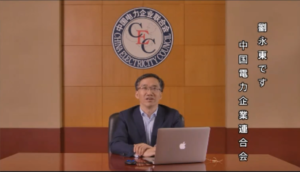 Over 90% of the participants found the online General Assembly to be good, and there were some active live questions from the attendees. We also took note of the post-meeting requests and comments from the participants and will work on improving the quality of our meetings. 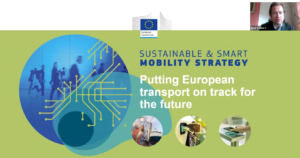 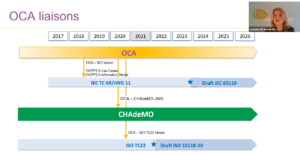 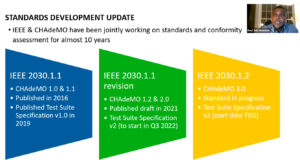