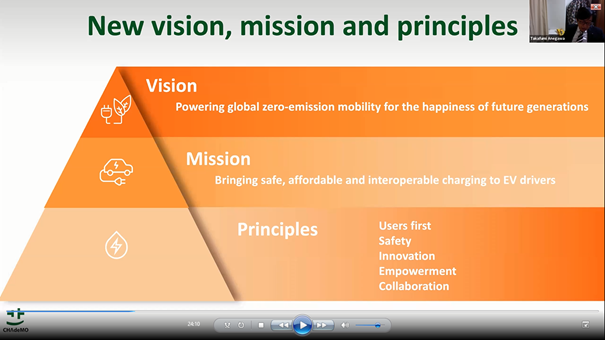 Presentation on CHAdeMO's vision by the CHAdeMO president. 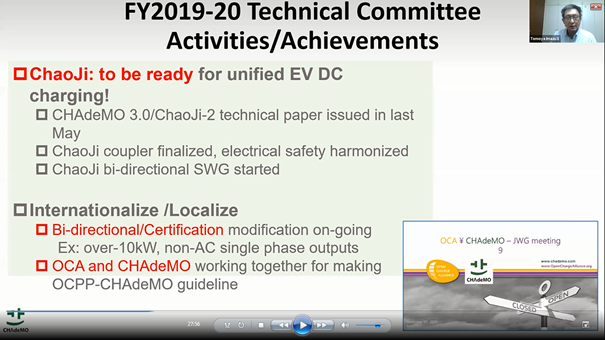 Presentation on the Technical Committee update by Toshiya Imazu 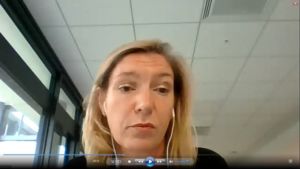 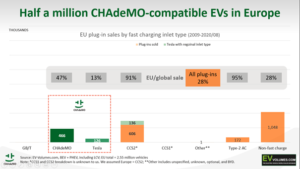 Half a million CHAdeMO-compatible EVs in Europe 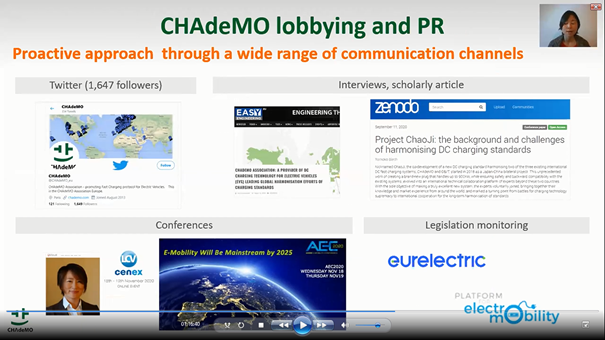 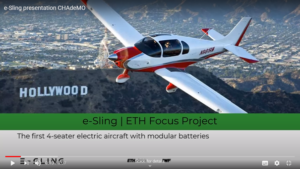 Takafumi Anegawa, President, CHAdeMO, the founding father of the CHAdeMO protocol, kicked off the EU annual all-member meeting, which was held online for the first time, enabling members from other regions to also join. Presenting the Association’s new vision “Powering global zero-emission mobility for the happiness of future generations,” Mr Anegawa reiterated the importance of its mission of bringing safe, affordable, and interoperable charging to EV drivers.

He forecasted that 50-100kW multi-standard chargers will remain popular in the coming 10 years, as it is suitable to the real needs of both CHAdeMO and CCS drivers. He alerted that the current battery capacity cannot respond to ultra-high power charging like 350kW, and that the deployment of such chargers should therefore be carefully designed and planned to avoid any accident.

His inspirational speech was complemented by the Technical Committee report by Tomoya Imazu, the Committee Chair of the Association. He outlined the recent achievements made in the development of ChaoJi, as well as CHAdeMO’s collaboration with the Open Charge Alliance (OCA) for the development of the CHAdeMO-OCCP implementation guidelines. Mr Imazu emphasised that the key for accelerating the unification of charging systems is to ensure backward and forward compatibility between chargers and EVs as much possible. “We don’t want to waste any EVs or chargers, regardless of the charging method they use,” he added.

The next was the presentation by Helen Perry, the head of Electric Passenger Cars & Infrastructure, Nissan Europe, who shared the company’s EV strategy for Europe. According to Ms Perry, the company continues to pursue CHAdeMO in general, especially in the area of Vehicle-to-Home (V2H). With regard to Nissan’s choice of CCS for Ariya, she explained that it was a “difficult but inevitable decision, because the company’s key mission is to bring cars to the market by listening to the varying demand of customers, region by region.” However, she clearly denied the speculation that the company was “switching to CCS,” as it was a decision they made for this particular model and that for other future cars, they will “select the best-suited charging method for each model.”

Ms Perry emphasised that Nissan will continue serving the over a half million Leaf drivers that use CHAdeMO globally and that the company was liaising with major European CPOs to ensure that CHAdeMO charge points be made widely available. She concluded her presentation by reiterating that CHAdeMO will remain a key component of Nissan’s plan and that the company was not leaving CHAdeMO at all.

Ms Tomoko Blech, Secretary General, CHAdeMO Europe reported the latest market status and CHAdeMO activities in Europe. There are over 16 000 CHAdeMO charging points available and multi-standard chargers remain the de facto standard in Europe, Ms Blech reaffirmed. She also showed the latest EV market share by fast-charge inlet type and demonstrated that almost 600k EVs are CHAdeMO-compatible (CHAdeMO and Tesla) in Europe, after 740k vehicles equipped with CCS 2 (CCS + Tesla model 3s). While over 90% of all CCS2 vehicles sales were concentrated in Europe, CHAdeMO vehicles in Europe make up about half of all CHAdeMO sale, clearly demonstrating the relevance of CHAdeMO as a major charging standard, not only in Europe but on a global scale.

Ms Mika Zaurin, CHAdeMO Europe, took over to present the EU activity report. Despite the cancellation of physical events, CHAdeMO has been constantly active this year. CHAdeMO was invited as a speaker to major EV exhibitions and conferences such as e-Move and CENEX, contributed to international publication reviews, and published scholarly articles and a number of position papers that are made available on the CHAdeMO website.

The last part of the member meeting was short introductions by new members: Rectifier Technologies, Tata Elxsi, i-Charge and Webasto.

This year, we also included a short pitch by the student of ETH Zurich (the Swiss Federal Institute of Technology in Zurich) on their exciting electric aircraft project using CHAdeMO.

All in all, the participants found the online member meeting satisfactory and meaningful. There were several voices requesting the organisation of thematic webinars and more frequent technical updates. We, CHAdeMO Association, are committed to responding to our members’ voices and hope to organise more virtual events in the coming months. Stay tuned!