On 10 March, CHAdeMO organised the 5th edition of V2G webinar (the video recording is available here)

The 5th edition of the CHAdeMO V2G webinar “Learning from innovators: A better way to create business from V2G” featured Mike Schooling, CTO and founder, INDRA Renewable Technology and Quentin Maitre, Chief Marketing Strategy & Development Officer, DREEV. INDRA and DREEV are companies with innovative undertakings in V2G and it was a great opportunity for us to reflect on where we stand today with regard to the V2G business development. 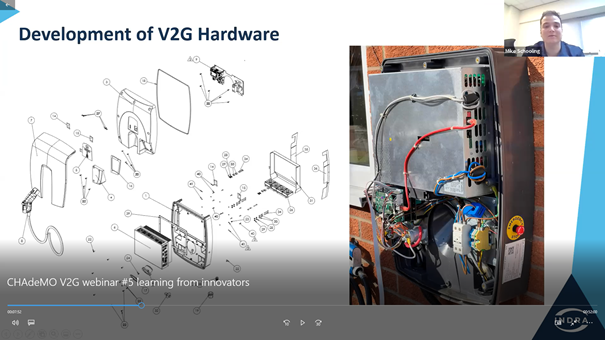 INDRA started the development of V2G in 2017 because they found ‘nothing suitable’ for domestic use in Europe. V2G chargers available at the time were mostly large 3-phase units that needed to be craned onto a concrete pad and cost over 15k pounds. The charger INDRA developed is much smaller (less than 25kg) and costs 6 times less. The company achieved significant cost reduction by using silicon carbide to make charger lighter, more efficient and waste less heat. The power was also reduced from 10kW to 6kW to align with the existing DC smart charging speed and to accommodate for the DNO approval requirement.

As a manufacture of V2G hardware, Mike Schooling underscored the importance of an independent certification body to guarantee charger safety and interoperability. Mike commented on the on-going CCS V2G development ‘One thing to call out in CCS is the lack of testing and certification system which CHAdeMO has got right. CHAdeMO’s V2G is very mature, and the existing hardware can be used as a basis for the future development of CCS compatible V2G unit.’

DREEV, EDF’s subsidiary providing V2G solutions for fleets, is in the middle of preparation for mass-market launch of its V2G solution around 2023-2024 by proving to the regulators that the power system and EV can work together to offer more energy services. One major achievement is that RTE (France’s electricity transmission system operator) has certified for the first time the participation of EV batteries from company fleets in the real-time balance of the electricity system. This means that DREEV can now officially offer balancing services to its customers in France (for more details, please follow DREEV’s LinkedIn.) 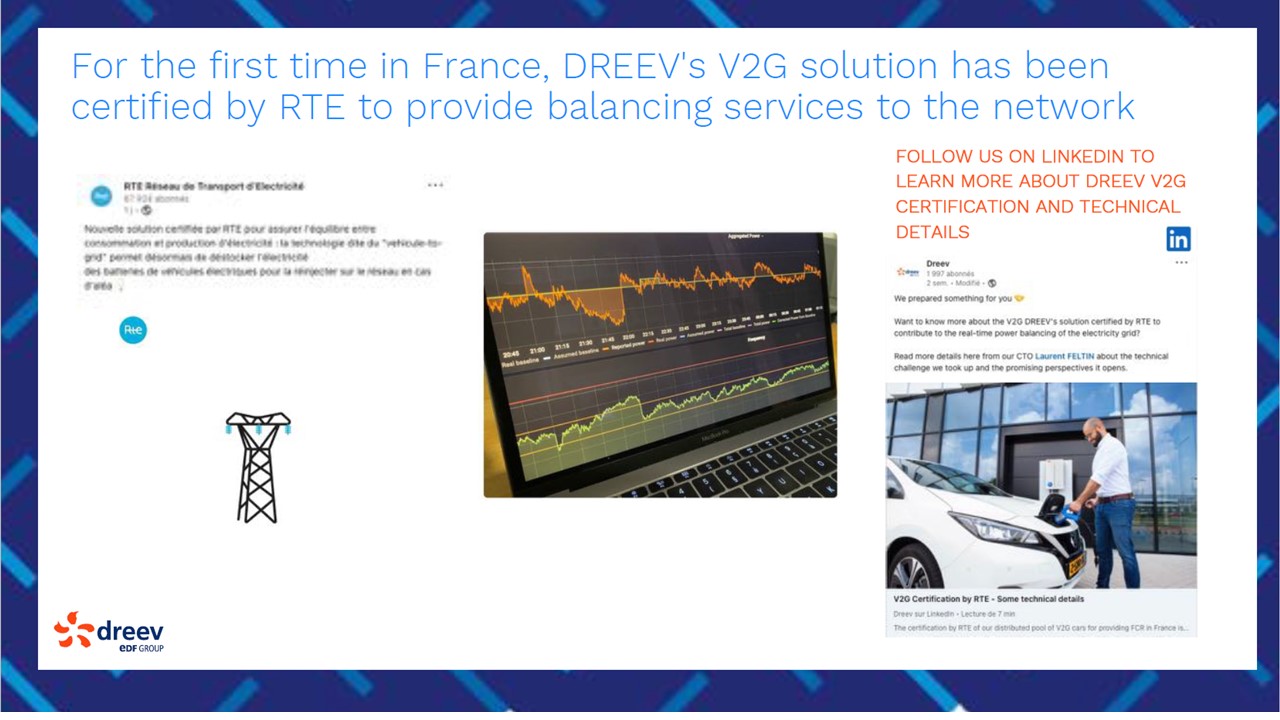 To help the market preparation phase, DREEV is also launching a large scale distributed V2G project by developing a Virtual Power Plant of 800 V2G chargers (400 CHAdeMO & 400 CCS) that will be installed for B2B customers, communities and EDF’s own fleets across Europe. Partnering with ABB and Nissan among others, the project will provide service stacking to generate financial revenues/savings and CO2 savings.

Quentin Maitre seems confident about the future of V2G. 'All the network operators now recognise the potential of V2G as a major source of flexibility to handle the renewable energy development. We just need to work together to unlock it.'

When asked what the biggest challenge in developing V2G business was, both speakers agreed that more cross-sector collaboration is needed as V2G involves many actors such as the regulators, TSO&DSO, charger manufacturers and car OEMs. 'EU is taking measures to harmonise internal energy market and all the countries will have same level of EV flexibility in few years. It will become much easier to offer V2G services in Europe,’ said Quentin Maitre.

V2G mass market seems close to be coming true and CHAdeMO will continue to be a platform where our members and other e-mobility stakeholder can meet and collaborate.