EDF engineers are now on a world tour with a Citroen EV. They were impressed with the charging infrastructure network in Japan

Arrival in the Land of the Rising Sun

Arriving several days before our car, we were able to adjust gradually to the habits and customs of the country. And to find out that when we were told that Japan was a very different place from the West, we were told the truth!

The first big difference, of course, is the writing. Even with the best possible effort on our part, it is nearly impossible (at least at first) to retain or even to recognize place names in order to locate a street or navigate inside the giant shopping malls of Tokyo. Add to this the fact that streets carry no names and that building and house numbers occur in an order unlike our own. We were immediately faced with this difficulty on our way to our first rendezvous, when we had to ask a dozen different people the way in order to arrive at the correct location and the right door. An address here indicates, in fact, merely the neighborhood sought and then the number of the block, and afterwards the building or house number attributed in chronological order (number one being the first construction, etc.) and so are not consecutive numbers along a street.

In terms of driving, we also have to find our bearings. The roads are in excellent condition, and the drivers more even-tempered than in France. On the other hand, we have had to adjust to driving on the left and managing without our GPS, which is incompatible with Japanese maps (as are all European GPS systems); and as the Japanese GPS is in Japanese, we are not able to use it (our Japanese is not yet fluent). We will have to use paper maps, and as backup in a tight place, the Google maps in our smartphones.

We picked up our car on Monday May 14th at the port, and after several miles out on Tokyo roads were stopped by the police on the 15th, our second day in Japanese territory and a record – it was three days before our first pull-over in the U.S. We had been driving in the wrong lane when we were stopped by an officer who, noting our unfamiliarity with the traffic signals, explained a few of the specific rules. This could have wound things up, but our French license plate was spotted, equally exciting curiosity. Within five minutes, at least 20 other police colleagues were surrounding our car, verifying every document we could furnish. Our adventure finished up over two hours later, and only after a trip to the police station. Our documents had passed the test, and moreover we had received a letter of welcome from the police, and offering an explanation of our situation in the event of any future traffic stops. All’s well that ends well!

Beyond a captivating culture we are sure to discover, Japan will be an exceptional stage for our electric vehicle. It is, to our knowledge, the only country in the world to have developed recharging infrastructure throughout its entirety, and of sufficient density to be of use along any travel route. For us, this means making our way to Nagasaki without having to locate a “plugger”. If all goes as planned, we will reach Nagasaki in only three days through use of rapid-charge terminals along our route, instead of the 10 days initially planned for using standard 100 volt sockets.

For our trip across Japan then, we will have a chance to test travelling long distances by electric car in real life conditions, and where a recharging infrastructure actually exists! 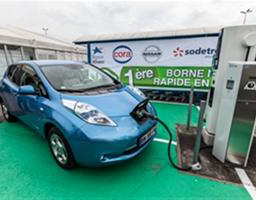 “ALSACE ENERGY CORRIDOR”: The installation of the first rapid charging terminal
We use cookies to ensure that we give you the best experience on our website. If you continue without changing your settings, we'll assume that you are happy to receive all cookies from this website. If you would like to change your preferences you may do so by changing your browser settings. Find out more.