Today, 15 December 2015, CHAdeMO Association and its members are celebrating the mark of 10,000 CHAdeMO charge points globally. Result of collaboration among electricity providers, automakers, operators and hardware manufacturers, the achievement is an important milestone in the development of the protocol and a sign of its growing global recognition.

Today, 15 December 2015, CHAdeMO Association and its members are celebrating the mark of 10,000 CHAdeMO charge points globally. Result of collaboration among electricity providers, automakers, operators and hardware manufacturers, the achievement is an important milestone in the development of the protocol and a sign of its growing global recognition.

Since the very first charger commissioned in 2009, CHAdeMO chargers have come a long way. Every year they have been gaining popularity and reach – from Aruba to Azerbaijan, passing through US and Europe, already 50 countries are equipped with CHAdeMO chargers, bringing the total to over 10,000. With Europe (2755), Asia (5974), North and South America (1400) and Africa hosting CHAdeMO chargers, CHAdeMO is for sure the fast charging standard with the most global appeal. Used by 12 car brands, the protocol was first deployed in a mass produced car, Mitsubishi i-MiEV, in 2009 and then in Nissan Leaf in 2010. With those and other brands that followed, CHAdeMO inlets now enable over 200,000 EVs globally to charge faster and go further.

Dave Yoshida, Secretary General of CHAdeMO Association, said: “We are very happy to see such a great progress of the protocol in only under 6 years. It is a true testimony to CHAdeMO’s appeal. While we are still on a journey to our final goal, reaching the 10,000 milestone is a proof of global recognition that the protocol is an important and lasting contributor to the electrification of transport in the world.“

“This achievement would not have been possible,” Yoshida continues, “if it were not for the people that believed in CHAdeMO: not only the automakers and charging manufactures that integrated the protocol to their EVs and PHEVs, and chargers, but also the operators that understood the importance of fast charging for the acceleration of electric mobility, governments that supported the deployment of the fast charging infrastructure, and EV-PHEV drivers who, by using the chargers, demonstrated that they do want and need them. We are thankful to all those who contributed to the promotion of the infrastructure and hope to continue this fruitful collaboration.“

CHAdeMO Association, a unique alliance of e-mobiliy stakeholders, enabled this growth by robust certification system, continuous protocol improvements in response to the market needs, and by its willingness to collaborate. Since it was joined by other fast charging protocols, the association, faithful to its mission of promoting e-mobility for all, has been a proponent of multi-standard chargers that can charge all fast-chargeable EVs and PHEVs and will continue to do so as the e-mobility become mainstream.

Having achieved an international and European standard status in 2014 with its publication as an IEC and EN standard, the Association is already looking to the future. Preparations for high power CHAdeMO are gaining ground and the first CHAdeMO V2G device is close to commercialisation.

The Association strongly believes that the future of the protocol is going to be truly charged. 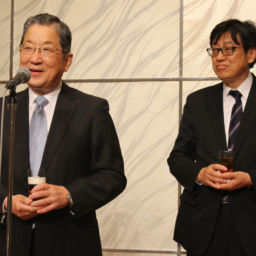 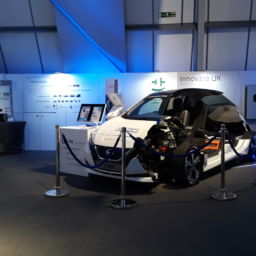 CHAdeMO co-hosted a booth with Innovate UK
We use cookies to ensure that we give you the best experience on our website. If you continue without changing your settings, we'll assume that you are happy to receive all cookies from this website. If you would like to change your preferences you may do so by changing your browser settings. Find out more.